According the classification of the “Ferrovie dello Stato italiane” the Italian railway holding, the locomotive pictured below is a D143. 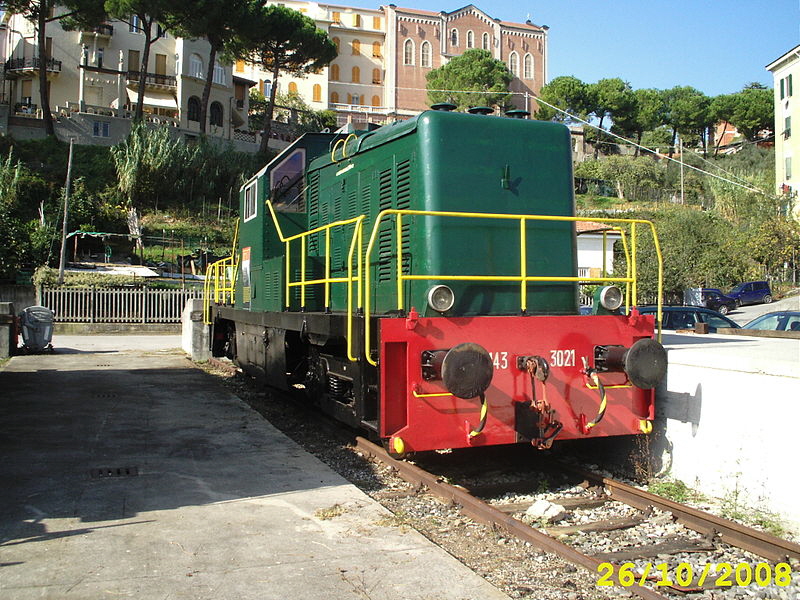 The D143s are diesel-electric hauling locomotives; they are the mechanical and electrical update of the Ne 120 series. This locomotive was built in 1943 and registered in 1944 by the Military Railway Service as serial number 1248.

During the 1948 it started the service in the Ferrovie dello Stato Italiane as 1200.026. The identification changed during the 1953 in 120.026. The serial number D143-3021 arrived in the 1971, following the complete revamping of the vehicle.
Actually, only few of such locomotive survived:

The Ne 120s were built by the Whitcomb Locomotive Works from 1941 and 1944. The engine was a Lenova licensed Buda, the electrical equipment was made by Westighouse.

Several series was built and used in North Africa and Middle East; they arrived in Italy during the 1944 with the Military Railway Service.

During World War II, the MRS operated in every theater of operation where American forces were present. At its peak, it included eleven grand divisions, thirty-three railway operating battalions, and eleven railway shop battalions. A variety of engineer, signal, and military police units provided support to the railroaders.

After freeing North Africa from Axis occupation, the Allies’ next move was to Sicily, and MRS personnel went with them.
Three days after the initial landings on 10 July 1943, the 727th Railway Operating Battalion went ashore at Licata, Sicily, and immediately began work on the Sicilian railway. Lieutenant General George S. Patton, Jr., later wrote that the battalion “organized national rail workers, located equipment, had steam up, and made a reconnaissance of the rail lines four hours after landing.” In its first twenty-four hours of operations, the 727th moved 400 tons of supplies forward to the 3d Infantry Division. By the third day it was moving 800 tons. During the campaign in Sicily, the 727th operated 1,373 miles of railway using 300 locomotives and 3,500 freight cars that carried an average of 3,400 tons a day to supply Seventh Army.

On 9 September 1943, the Allies made their first  on the European mainland at Salerno, Italy. After encountering heavy German resistance, they spent the rest of the month building up men and supplies in the beachhead in preparation for an offensive to capture the port city of Naples. Three days after the first Allied troops entered Naples, the advance party of the 703d Railway Grand Division (Atlantic Coast Railroad Company) reached the port only to find that the combination of Allied bombing and German demolition had left the rail yard in shambles. Technical Sergeant Louis L. Russel of the 713th Railway Operating Battalion described the scene on Wednesday 6 October: “Charred and twisted cars were strewn around haphazardly, with lengths of rail cross ties still attached, pointing toward the sky.”

It was a mess, but the next day, First Lieutenant R.H. Anderson, a yardmaster from Newton, Kansas, was optimistic when he said, “I believe we can get a train out of this by Sunday.” With everybody in the battalion, including conductors, engineers, and firemen working to clear the debris, Anderson proved correct. On Saturday, a test train consisting of an old Italian locomotive pushing five cars moved four miles out of the yard. Four days later, six trains moving an average of 450 tons each, rolled to the forward railhead. With the rail yard back in operation, Naples became the primary port for supplying Fifth Army.